Sanjeev Chimalgi belongs to the most prominent of the new generation of North Indian classical singers. He started his career from his early youth and has performed all over India as well as in the USA, Great Britain, Spain, Germany and Switzerland. His concerts are characterized by a special atmosphere, whereby his strength lies in the subtle exploration of the raga as well as in the sensitive use of svar (sound) and bol (the improvised syllable language). Sanjeev Chimalgi has recorded a number of classical albums as well as bhajans and film songs. He can also be heard on the Grammy nominated albums ‘Rise’ and ‘Traveller’ by Anoushka Shankar. 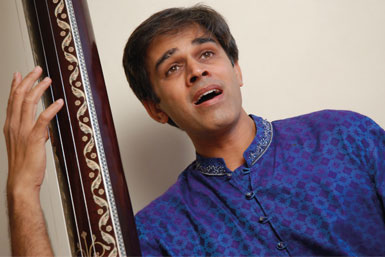